Posted by Kenneth Howard Smith at 1:00 PM No comments: 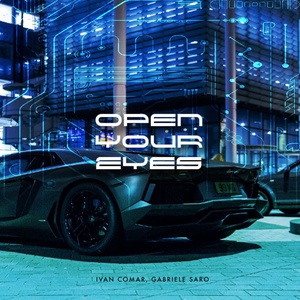 
Gabriele Saro was born in Spilimbergo (PN) and lives in Villalta di Fagagna (UD). From an early age he showed a great predisposition towards music, when at the age of 6 he reproduced the melodies he heard on television on the piano.

We can say that two souls have always accompanied him: one scientific and rational, the other more artistic and creative. Scientific high school diploma and Degree in Business Economics on the one hand, diploma in violin and a master's degree in composition for film music on the other: they are two ways that, when possible, Gabriele tries to cross. In this direction the master in neuro-linguistic programming goes that he followed in 2012 and the subsequent collaboration with the international NLP trainer Marco Valerio Ricci for the creation of sound material for therapeutic purposes: music and rationality, research and harmony.

These are just some of the interests that move Gabriele, and that influence his artistic training: anthropology, biology and science fiction ... but what gives meaning to his days is the activity of musician and composer.

He collaborates as a violinist in classical and light music formations, and sings in various choral formations of Friuli-Venezia Giulia with which he has toured abroad, the last one in Canada. But there is not only the violin, "in the strings" of Gabriele: he also plays the piano and the organ, in addition to listening to music of all kinds, soundtracks in a particular way. Deeply convinced that he never stops learning, he combines his experience in the field (attending choral conducting concerts and seminars, summer campuses and competitions for wind orchestras) with his passion for studying composition. He attended Masterclass in Film Scoring and Production Music with the Masters Hans Zimmer ,Armin Van Buuren, TC Jones, P. Buonvino, R. Frattini, G. Plenizio, R. Calabretto, S. Rapezzi and G. De Mezzo and in composition, arrangement and direction with the Masters Conrade Pope, R. Stroope, V. Miskinis, V. Sivilotti, R. Miani, L. Donati, A. Cadario, V. Zoccatelli, A. Martinolli, W. Pfaff, V. Poles, G. Venier and M. Corcella. He also holds Masterclasses in Film Making with Directors Ron Howard, Werner Herzog, Martin Scorsese and Spike Lee.

Art and science, sacred and profane: Gabriele's double soul is also revealed in the variety of his published compositions. An emerging composer of sacred music thanks to the numerous masses and pieces for choir a cappella or with instrumental accompaniment, he also boasts flattering appreciation for his compositions of secular music, mainly for symphonic and wind orchestras.

The enthusiasm and passion he puts into his work and life has also led him to meet many people, and with some he has started to collaborate. He recorded the CDs '' Sunsets '', '' Sunsets 2 '', '' Passion '' and “ SensationS ” (available worldwide on AMAZON, BigCartel, Macrolibrarsi, Il Giardino dei Libri and in digital download) . These pieces for piano, violin and cello, awarded at the Global Music Awards,can be considered the first works that bring Gabriele closer to the world of music for images: they are works that have had a great audience response in concert halls with radio broadcasting in many countries of the world, USA, Canada and Japan above all, leading to Gabriele great satisfactions.

His collaborations lead him to work and share his notes with various artists also for the creation of songs of Pop, R&B, Club, Rock and Electronics songs and recent are the commercial licensing contracts with Licensing Companies and American Publishers  for the exploitation commercial of these songs (Top 100 Artists, Omnicom Group NYC, major films, indie films, networks and cable TV, advertising, in store play, phone apps, video games); his music, also distributed with Alias ​​Gabe Saro, have been chosen by leading companies such as FOX, BBDO, L'Oreal, Fed Ex, American Media Inc., Clockwise Media Ltd.

He has won countless prizes in national and international composition competitions both for pop music, such as USA Songwriting Competition and UK Songwriting Contest, for choral, orchestral and film music; enormous satisfaction for the contemporary R&B songs    offered to superstars such as Usher, Chris Brown and Rihanna .

Among his Awards we also mention documentary music, participation in E. Whitacre's Virtual Choir 4 and 5, over 800 pieces recorded at SIAE and ASCAP (USA), being a member by right in The Guild of International Songwriters and Composers , as well as having been selected by right on admission qualifications for the post-diploma Master of Composition at the prestigious Ljubljana Academy (2017)

A life for music and a music for Life: this is Gabriele's true biography
Posted by Kenneth Howard Smith at 5:46 PM No comments:

Posted by Kenneth Howard Smith at 12:20 PM No comments:

Posted by Kenneth Howard Smith at 12:52 PM No comments: